The classic Hollywood portrayal of a man jolted awake at 5 a.m. with crushing chest pain from a heart attack contrasts against the more subtle symptoms of heaviness and fatigue in women who suffer cardiac events.

Now medical researchers working to understand that range of symptoms have found major differences in the hearts of male and female mice, and new insight into how the body clock affects the sexes differently.

The discovery could open the door to a better way of understanding heart disease.

To move forward, scientists first had to take a step back to examine how heart disease manifests differently in men and women. Historically, though men and women vary in size, shape and more, once male and female patients were covered in hospital gowns, doctors and researchers viewed them as one and the same.

That has proved misguided given that, for one thing, the hormone estrogen influences how women are affected by heart disease, offering some protection before menopause.

Cardiovascular researcher Tami Martino focusses on the differences in how male and female hearts respond to time-of-day signals. It turns out that the circadian clock, the body’s chief timekeeper, may offer female hearts more protection against heart disease.

Tami Martino says her study is the first to look at how a circadian mechanism helps to protect the female heart. (University of Guelph)

In her study, Martino — a biomedical sciences professor at the University of Guelph — employed mice with a genetic mutation in the cells that keep time, helping the body respond to light and dark signals. In humans, similar cells help our bodies to rev up after we awaken and to rest at night.

It is “the first time that anybody’s been able to look at how the female heart is protected and specifically how the circadian mechanism helps to protect against that as well,” said Martino.

That genetic “clock” mutation effectively made male and female mice into the equivalent of shift workers. But only the aging male mice showed circadian systems that were out of whack, which took a toll on their hearts.

A healthy circadian clock protects the heart from cardiomyopathy, a disease of the heart muscle. The researchers found that, in female mice, the presence of estrogen seems to keep the heart healthy even when the sleep-wake cycle is disrupted.

Martino’s experiments, published in the journal Cardiovascular Research, also examined the effects of ovarian hormones in protecting female mice aged to the equivalent of 70 to 90 years in humans.

As soon as investigators removed ovaries from female mice, the rodents developed heart disease. The researchers measured how much the heart muscle struggled to keep up with energy demands, and found they fared worse.

This work could be an important step toward understanding how women’s bodies can cope with living much longer past menopause than generations past, without the heart-protecting benefits of estrogen.

Martino’s research builds on work acknowledged this week with a Nobel Prize in Physiology or Medicine. The Swedish academy honoured three U.S.-born scientists for their “discoveries of molecular mechanisms controlling the circadian rhythm” in fruit fly models. 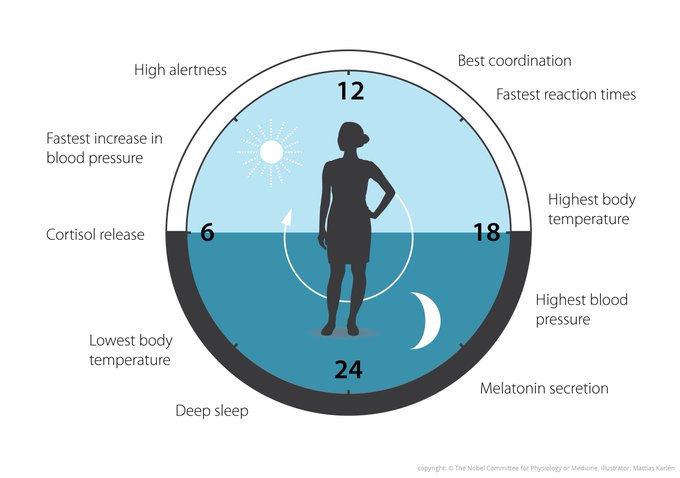 This area of research is helping to shed light into how we can adapt to an increasingly 24-hour lifestyle.

Our cellular clocks can be thrown out of synch travelling across time zones or doing shift work, for example. Now scientists are investigating what happens when we burn the candle at both ends because of “social jet lag” — hectic schedules that lead people to sleep in on weekends after going too hard all week.

For Martino and her colleagues, the mice findings open new avenues to explore.

If body clocks respond differently in male and female hearts, it presents the possibility of giving men and women heart medications at different times of day, she said.

For Dr. Cara Tannenbaum, scientific director of the Canadian Institutes of Health Research’s Gender and Health, the findings are an exciting confirmation of how males and females differ.

Scientists are looking at other ways heart health varies between men and women, said Tannenbaum. They’ve found sex differences in the progenitor, or precursor, stem cells that rebuild heart muscles, for example.

‘Personalized medicine for men and women based on the science of sex differences is possible and already happening.’– Dr. Cara Tannenbaum

Still, it will take “a bit of a culture change,” for medical research to catch up on how treatment should differ between the sexes, said Tannenbaum. “We’re getting there.”

One example: Health Canada warned that prescription sleeping pills containing zolpiderm, sold as Ambien, should be prescribed with different doses for men and women.

“This example reflects the concept that personalized medicine for men and women based on the science of sex differences is possible and already happening,” Tannenbaum said.

With files from CBC’s Amina Zafar

DNA study provides insight into how to live longer

Dove Apologizes After Controversial Ad Is Slammed on Social Media

Canpers.com is your news, entertainment, music fashion website. We provide you with the latest breaking news and videos straight from the entertainment industry. Check out the hottest fashion, photos, movies and TV shows! Request removal of content by email |
Contact us: info@canpers.com
© 2020 Canadian Press of Ethnic Residents Society.
MORE STORIES

Fito Centore - July 8, 2019
8
Food Tube isn't just one channel - it's a whole network of brilliant, passionate food and drink makers. In some of the network's highlights...
%d bloggers like this:
Skip to toolbar